This is a featured article in Sealing Technology, following the kind initiative of the Journal's Editor, Mr Robert Flitney. The article originally appeared in Tribology International. Permission to publish an edited version of this paper in Sealing Technology was obtained from the Editor of Tribology International, Professor Brian Briscoe, and Elsevier. The original article was edited by Mr Flitney and this new version is simpler and shorter, lacking most of the technicalities of the mathematical model. The authors are thankful to Mr Flitney for his kind initiative to feature this article in Sealing Technology.

Elastomeric seals used in hydraulic systems obey complex stress-strain laws at high sealed pressure and large temperature differentials. For elastohydrodynamic numerical analysis, it is important that the rubber behaviour under stress is analysed with a suitable stress-strain model. A nonlinear model has been developed here and tested to produce numerical results for seal performance. The nonlinear model is then compared with the classic Hookean model of linear elasticity, to establish the difference between the models and the limits of applicability and validity of each for a wide range of operating conditions. 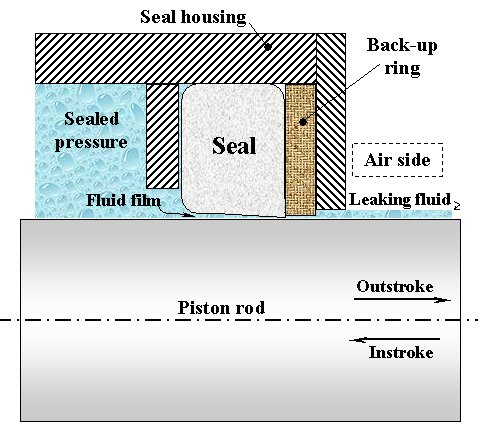 Configuration for the seal model.

Further details about this study.