A numerical model developed by Nikas [1, 2, 3, 4, 5, 6] to study rectangular elastomeric seals used in linear hydraulic actuators has been expanded to study the system of two identical seals in a row at some distance from each other (tandem or dual seals). The objective is to evaluate the leakage performance of this particular seal arrangement and possible problems associated with the development of a substantial interseal pressure, which have been observed in some experimental studies. The updated model involves anti-extrusion rings supporting the tandem seals. The present study covers the full typical range of operating conditions of such seals, namely sealed pressure between nearly zero and 35 MPa, stroking velocity between 0.05 and 0.5 m/s, and operating temperature from 54 to +135 ºC. The leakage results are in quantitative and qualitative agreement with experimental studies and industrial experience. It is found that the tandem seal arrangement offers a significant reduction of leakage (in the order of 50 per cent or more) compared with the single-seal configuration and that the interseal pressure remains low until the time when it rises abruptly to high value, even exceeding the sealed pressure and risking seal failure. However, by allowing a sufficiently large interseal space, the interseal pressure problem is resolved for the projected service life of the sealing system.

The development of the model is based on a linear hydraulic actuator, consisting of a steel cylinder, a piston rod, and tandem elastomeric seals of rectangular cross-section, which are both supported by back-up rings at their low-pressure side. Figure 1 shows a simplified partial view of the assembly. The space between the seals and rings (interseal space) is originally filled with atmospheric air and, later, during operation of the actuator, with a mixture of air and leaked hydraulic fluid (and possibly gasses dissolved in the fluid). 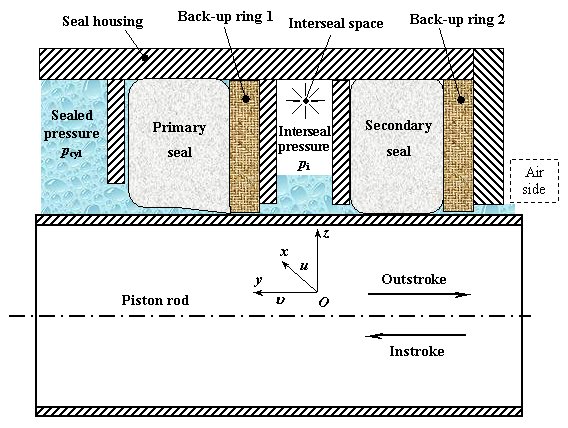 What is of interest in this study is the leakage of the system. This is defined as the mass of fluid leaked to the air side of the system (see Fig. 1) during a given time interval, that is, leakage past the secondary seal and back-up ring 2. This is compared with the leakage of a conventional system, consisting of only the primary seal and back-up ring 1 in Fig. 1, without a secondary seal present.

The mechanics and elastohydrodynamics of the individual components of this system, namely of the elastomeric seals and back-ups rings, have been modelled by the main author in a number of papers, as explained in the Abstract above. The individual models are combined in this study to make predictions for the tandem (dual) seal arrangement. The global model confirms experimental predictions and industrial experience, which show the development of an interseal pressure at the interseal space (see Fig. 1), owing to leakage of the two seals during reciprocating motion of the piston rod. This interseal pressure will normally reach dangerously high values after a sufficiently large number of operating cycles of the system. The other problem is that the latter occurs abruptly and can damage the seals and back-up rings. Figure 2 shows this phenomenon, as simulated with the model, for sealed (actuator) pressure of 13.8 MPa (2000 lb/in2), stroking speed of 0.2 m/s, and operating temperature of 23 °C.

Fig. 2. Variation of interseal pressure and gas volume during operation.

Nevertheless, the critical number of strokes before the substantial interseal pressure build-up can be predicted, as in Fig. 2, and thus the problem avoided by a pressure relief or re-circulation valve. On the other hand, the critical number of strokes may be far higher than the normal number of strokes during the service life of the system (thus the problem is non-existent) or can be substantially increased by allowing for a larger interseal space. These scenarios are easily simulated by the model, which can thus be used to design an optimum or at least a safe system.

With the interseal-pressure "problem" out of the way, the benefit of the tandem seal can be realised. The model shows a a significant reduction of leakage (in the order of 50 per cent or more) compared with the single-seal configuration. An example of this is shown in Fig. 3 for very low to high temperatures and  stroking velocity of 0.2 m/s.

Fig. 3. Example of the leakage benefit of tandem seals.

The one-seal configuration is significantly inferior to the tandem seal system at all temperatures. Various other results are presented in the paper to show the performance of the system at a wide range of operating conditions and how it compares with the normal single-seal configuration.