In a series of publications, the author has shown that the passage of ductile micro-particles through elastohydrodynamic contacts results in frictional heating that can greatly affect surface damage. The thermoviscoplastic numerical model built for those studies is extended in the present article. A more rigorous analysis of dynamic (strain-rate) effects is performed and a new element of heating is introduced, namely that owed to plastic work of the surfaces being indented. The model is then quantitatively validated against experimental data on soft and hard particles extruded in rolling and rolling-sliding contacts. It is also compared to past numerical predictions of the author. Following its validation, the model is further expanded to predict the formation of dark and white tribochemical layers of overtempered and untempered martensite, respectively, on steel surfaces, caused by the particle-induced frictional heating. Such layers are well-known in machining processes of hardened steels as being the result of phase transformations and play a critical role in contact fatigue. The debris model in this article is used to predict the layer thickness and relative hardness for a variety of operating conditions. Layers of micrometric thickness are typically found and graphic examples are presented, linking their location to that of debris dents. A parametric study examines the role of particle size and hardness, Coulomb friction coefficient, and contact rolling velocity on dark and white layer thickness and relative hardness. The layers are zones of great inhomogeneity and thermomechanical anisotropy, increasing the risk of spalling by delamination as they are potential sources of crack initiation, particularly in sliding contacts. However, white layers in particular may actually be beneficial to contact fatigue in rolling contacts because of their substantially increased hardness. The conclusion of the study is that debris-driven surface indentation and abrasion should no longer be viewed from a purely mechanistic or geometrical perspective but has to consider the tribochemical or microstructural-modification factor for the correct evaluation of the remaining useful life of a dented or abraded contact.

Some figures and details from this work

Figure 1 shows the distribution of dark and white layer thickness on the follower surface in an elastohydrodynamic contact with counter-surface speeds of 30 and 20 m/s, resulting in 10 m/s sliding speed (20% slide-roll ratio). The AISI 52100 steel surface has been dented by a 36 micrometre, 750 Vickers, M50-steel spherical particle of almost equal hardness to that of  the elastohydrodynamic contact surfaces. A shaded-relief map of the generated dent is also shown as predicted by the theoretical model. The particle sticks to the driver surface after its entrapment and abrades the follower surface of the contact. The maximum temperature at the surface of the dent reaches the melting point of 1450 °C. As a result of the high temperature and contact pressure (maximum value of 2.6 GPa), a white layer is formed with mean thickness of 1.2 micrometres and maximum thickness of 2.8 micrometres and surrounds the dent, which has a maximum depth of 2.5 micrometres on that surface. The white layer is in turn enclosed by a dark layer with mean thickness of 2.5 micrometres and maximum thickness of 3.8 micrometres. 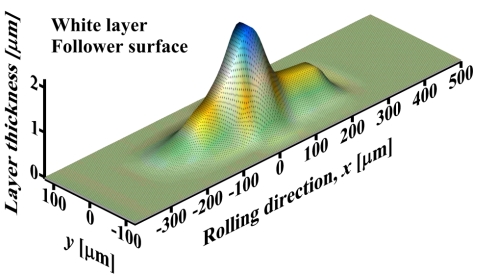 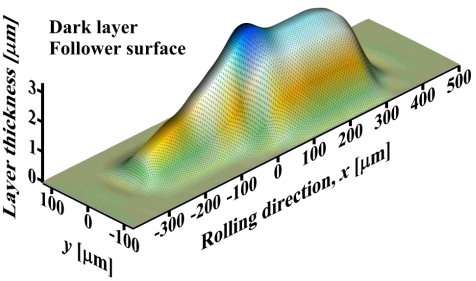 A cross section at y = 0 of the dented counter-surfaces in Fig. 2 clearly shows the dents, dark layers and white layers obtained by the numerical model. 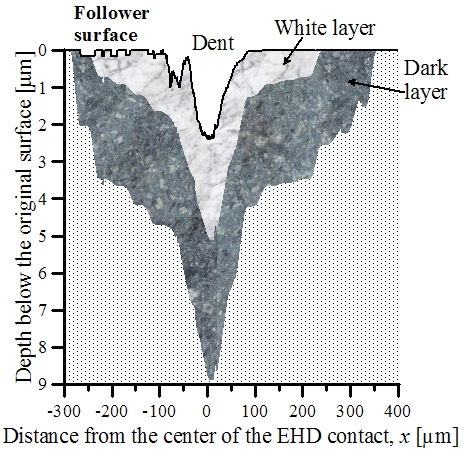 Fig. 2. Cross section at y = 0 for the dents and tribochemical layers shown in Fig. 1.

A parametric study included in the article examines the role of particle size and hardness, Coulomb friction coefficient, and contact rolling velocity on dark and white layer thickness and relative hardness. For example, the effect of particle size is shown in Fig. 3. 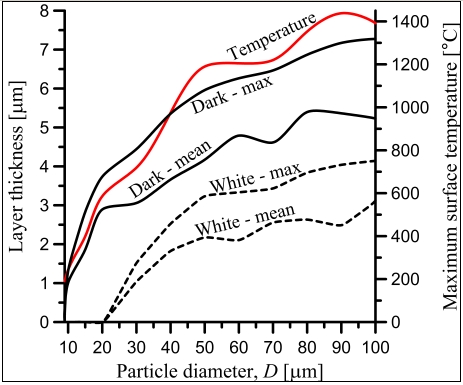 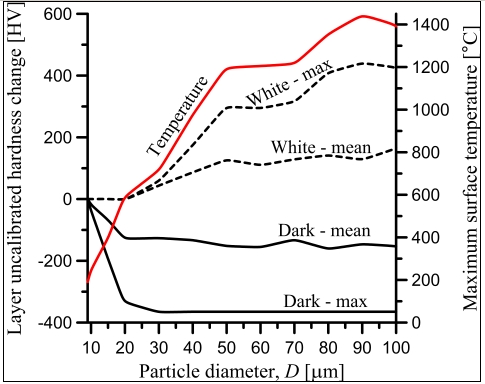 Fig. 3. Effect of particle size on dark and white layer thickness (top) and relative hardness (bottom). The "uncalibrated hardness change" shown is proportional to the true hardness change of the layers. Also shown is the maximum surface temperature attained due to the frictional heating by particle extrusion. This case concerns steel particles of 200 Vickers cold hardness in a rolling elastohydrodynamic contact of AISI 52100 steel surfaces (750 Vickers).